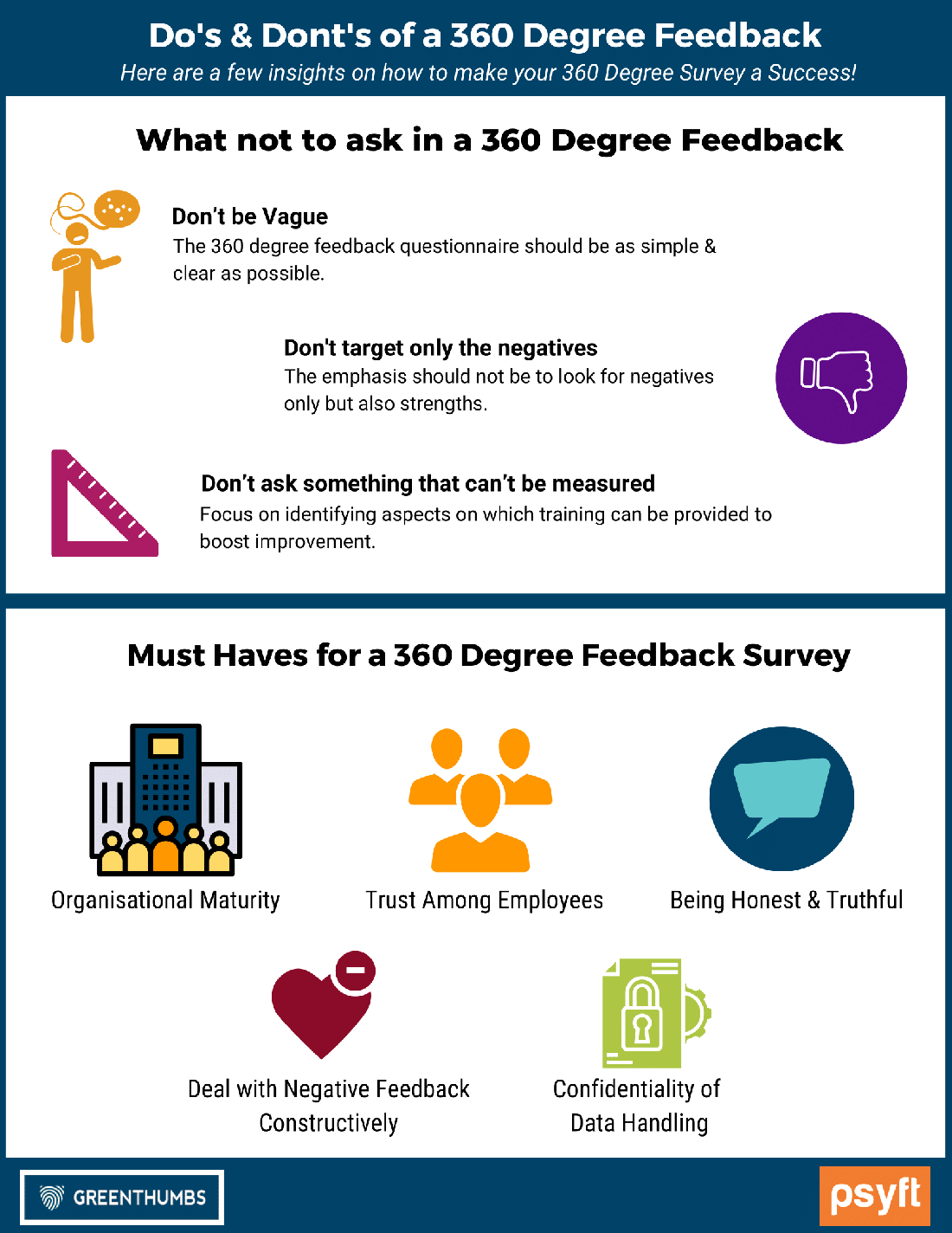 Sometime back Economic Times wrote an article on "What not to do in a 360º performance review of your boss". Here we are discussing about the types of questions you should generally refrain from asking in a 360-degree feedback survey.
360 Degree feedback is a smart and easy method for organizations to get a complete picture of employee performance and behavior. Traditionally, employees received feedback from their direct managers, like a one-on-one session. However, to get an overall picture, you want to get feedback from across the organizational hierarchy and thus comes in a 360-degree feedback program.

What is a 360 Degree Feedback?

360 degree feedback survey is a feedback survey that provides thorough and constructive feedback to individuals from multiple respondents/raters - their direct reports/subordinates, managers, peers/colleagues, and externals along with self-assessment. The primary reason to do this full circle confidential review is to provide feedback about ones' performance and behavior at work, from multiple perspectives. A 360-degree review focusses on areas of strength as well as areas of improvement for an individual (feedback recipient). A 360-degree feedback survey is a powerful method to gather authentic feedback and help employees boost their performance within their organization.
360-degree appraisals are much more effective than the general performance appraisals. These help gain a better, more clear and objective understanding of employee productivity and potential.

Why Run a 360 Degree Feedback Survey?

360-degree feedback provides a platform to give open and honest feedback across various competencies. It also reduces the hierarchical inhibitions people may feel especially when providing feedback for their managers/leaders.
• Successful Performance Appraisals - Get a complete picture of employee performance, core competencies, areas of improvement, etc.
• Training Need Analysis - Keeping the key findings of the 360 feedback report, companies can initiate the right training plan for their employees.
• Succession Planning - 360 Degree feedback helps companies identify their HIPO's and nurture them to be future leaders.
• Better Teamwork - If employees comprehend their feedback constructively and identify their strengths, weaknesses, and core conduct, etc they'll end up becoming better co-workers and there will be less friction among teams.
• Self v/s Other Assessment - It's great to see how others perceive you. 360 review allows employees to look at their performance vis-à-vis how other perceive them at work. This is helpful when it comes to working towards bettering your skills.

What not to ask in a 360 Degree Feedback?

This brings us to the questions of how can we make this exercise most effective. While a 360-degree feedback survey is a great tool for employee evaluation, if not conducted correctly, such an exercise may not bring along any benefits really, and might end up being nothing more than a slam book.
More importantly, studies show that asking the wrong questions in a 360-degree feedback survey can demotivate employees. In addition to this, if employees are not well sensitized about the program, its purpose, etc. it can also lead to confusion among employees.
Thus, it's crucial to make sure that the survey questions convey company values and goals. Here's some insight on the type of questions you should refrain from asking in a 360 feedback survey:

• Don't Ask Something That Can't be Measured or Changed
You need to identify competencies that are measurable and in turn trainable, for example – interpersonal relationships, productivity, problem-solving teamwork etc. Intangible questions may not prove useful as these will not be able to back any action plan or employee intervention. The process of 360 feedback is to bring about improvement so our focus should be to identify the aspects on which training can be provided. Tapping in the untrainable aspects will be a waste of resources of the company and employees may find it difficult to handle being rated as poor on certain aspects with no knowledge on how to improve upon them. Ask things that you can your employees help improve on.

• Don't Target only the Negatives
Don't focus on weaknesses; with this the feedback will turn into criticism. The premise of running such a survey is enabling a constructive process of development, which will be undermined if we only focus on the blind spots. The emphasis of the 360 feedback should not be to look for the negatives only but also the strengths. Even if the negative points are highlighted a parallel process of how to improve upon the negatives should be included.

Must Haves of a 360 Degree Feedback

There are certain must haves to be kept in mind when an organization plans to run a 360-degree feedback exercise –
• Organizational maturity to understand the purpose.
• Confidentiality of data handling.
• Dealing with negative feedback constructively.
• Providing a true picture for an individual.
• Trust among employees & action plans for employee development.

The Horn & the Halo Effect

The positive or negative perception of certain employees or managers tends to cloud ones' judgment and leads to inaccurate ratings and feedback. This is something we have to avoid.

Focusing only on recent times

Judging someone on only recent behavior or performance instead of considering the overall picture, can be counter-productive.

Some employees might resort to Personal attacks on someone in the veil of feedback. Harsh criticism instead of providing feedback constructively is in bad taste.

Envy could play a role, this can happen especially in the case of 360-degree reviews by peers/colleagues. If this happens with a star employee, it's not good news for any organization.

The crux is that any initiative or exercise an organization plans to conduct is good and effective only to the extent of how is it conducted. If run in the right spirit, a 360-degree feedback can do wonders for an organization, if not, it's just a waste of time and money. So, before you launch your 360, make sure your people are ready for it.